Spring is officially here, or is it?  As avid birders, the Dispenser Amenities team has been patiently waiting for a sight of the annual Tundra Swan migration.  After a long, cold winter that, only now, seems to be dragging a little into spring, we have yet to witness the first flock of swans; the long anticipated signal that this tortured winter has finally ended.

The Eastern Tundra Swan species usually make their winter homes in Virginia and North Carolina. However, a small number of the most enthusiastic swans, have made a permanent winter home in South Carolina all thanks to the 1970’s effort of land owner, Allen Spaulding to attract them further south.  South Carolina has since become a vacation hot spot for swans who spend the majority of their stay there sleeping afloat the water or using their long, graceful necks to graze on underwater plants and shellfish.

The Tundra Swan is a giant in the feathered kingdom, on average, weighing 16 pounds, with a wingspan of 5.5 feet, measuring an impressive 4.3 feet from beak to tail.  The largest male swans can grow to be significantly bigger with a maximum body weight of a whopping 23 pounds.  Swans tend to choose their life mates when they are two to three years old and will remain together for another year or two before breeding.  Perhaps one of the most impressive traits of this elegant animal is the celebration dance that they perform as a couple after courtship is completed.

Every year, come spring, it becomes time for the Tundra Swan’s long journey to the northwest.  They cross a distance of approximately 4000 miles by flying in 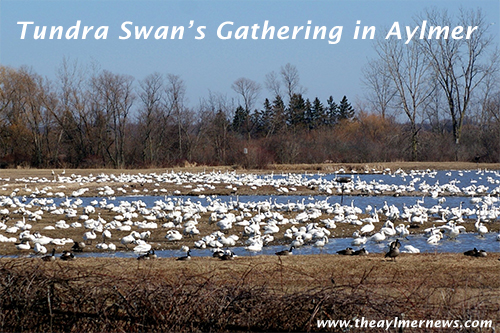 nighttime marathons.  They are pretty hard to miss if you are listening.  Formerly known as the “whistling swan”, the leader of the flock will regularly voice a loud “who-who” sound which will be immediately chorused by the rest and can be heard up to 3.5 miles away.

Their journey north begins with a “staging” gathering in East Pennsylvania.  At the “staging”, Swans gather together to eat, and prepare for the long journey.  From there, they head straight to the southern Great Lakes for a stopover near our neighborhood of London, Ontario. This is where we will be waiting for them, cameras in hand.  Each March, approximately 15 percent of the Eastern Tundra Swan’s global population stop at a pond adjacent to the police station of our neighboring town, Aylmer, Ontario.

After their rest stop in southern Ontario, this gaggle of Tundra Swans head northwest, some through the prairies of Saskatchewan, others directly north along the Manitoba/Ontario border depending on which northern breeding ground they prefer.  A select few swans remain in northern Ontario, but most head much farther north into the Arctic Circle.  Whether they choose Alaska, or the Yukon as their Arctic breeding grounds, they will likely be within a short drive of one of our many Holland America Princess customers.  Many bird photographers gather in Anchorage, Alaska to snap a picture of the Tundra Swan’s arrival.  We are sure our friends at Westmark Anchorage Alaska enjoy the sight as well as the extra travelers in the area!