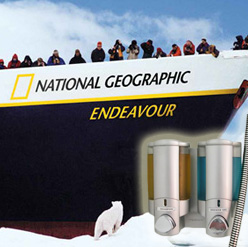 Our customers at Lindblad Expeditions have landed a new primetime television partner – Jeopardy!  From January 20 – 24 and 27 – 31 viewers who have watched the show will be encouraged to visit Jeopardy.com and answer a question about final Jeopardy for a chance to win an expedition aboard a Lindblad every day that the sweepstakes is active.

Dispenser Amenities products have been in use on Lindblad’s National Geographic ships throughout the world for over a decade.  By using AVIVA Dispensers for their stateroom amenities Lindblad is able to offer their passengers high quality shower liquids without creating waste.

We are certainly looking forward to seeing one of our favorite partners be featured on Jeopardy and will definitely be tuning into the show for the contest.  Whoever the lucky winners turn out to be, the Dispenser amenities folks will be watching what happens with travel envy!