Every day, hotels in North American dispose of approximately 2.6 million hardly-used bars of soap to landfills.  These same landfills are bursting with millions of partly-used plastic bottles of shower liquids, fellow casualties of the waste associated with the hotel industry.

The Global Soap Project, based in Atlanta, Georgia, is a non-profit organization with a mission of turning  bar soap waste into a valuable source of improved human health in under-developed countries.  Dispenser Amenities, in contrast, focuses on plastic bottle waste; with a mission to rid the industry, and the world of the billions of individual plastic bottles of shower liquids sent to landfills every year.  The new partnership between Dispenser Amenities and Global Soap Project creates the opportunity to address two sources of hotel waste.

“We know that bar soap may still be used by our customers who switch from little bottles of liquid to bulk Dispensers,” says Dispenser Amenities President, Ian Wallace.  “We want to support the Global Soap Project in two ways:  first we want to encourage every customer of ours to send their wasted bar soap to the Project.  Secondly, we pledge to provide financial support based on every new property bigger than 100 rooms who becomes our customer. With this support, we will help the Project defray their costs.  It costs $4 per person to provide soap and education for one year.” 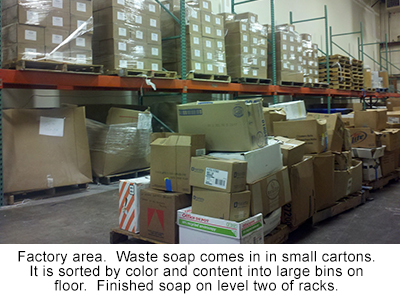 The Global Soap Project began operations five years ago, in 2009.  In 2013, they collected 250,000 pounds of soap from over 1,300 hotels.  This bar soap waste was recycled into 1 million bars of soap and distributed to 140,000 people in 32 countries.  This year, they plan to make over 1.5 million bars of soap in North America.  Sam Stephens, Executive Director of Global Soap Project states that the growing demand for soap in under- developed countries has surpassed the Project’s supply of bar soap waste. “Unfortunately,” says Sam Stephens, “we have to say ‘no’ to far more requests than we are able to say ‘yes’ to.  We have the capacity to recycle far more soap that we receive, so more hotels coming into our system is crucial to our ability to serve the huge need for soap. We are stacked with orders through 2015.”

The soap recycling process is simple. Small bars of soap received from hotels are sorted by color and content before being pulverised into powder and cleaned.  After the powder has been thoroughly sanitized, it is compressed and extruded into long “loaves” of new soap. The loaves are then cut into 4 ounce bars, packed 120 bars to a carton, 50 cartons to a pallet and shipped in 20 foot containers which hold 160,000 bars of soap.

The Global Soap Project works with NGO’s throughout the developing world, as well as North American organizations such as the Centre for Disease Control, Care and the United Nations. With the help of these organizations, Global Soap Project sends soap to more than 30 countries each year, half of which are located in Africa, the rest spread throughout Asia, and Central and South America. 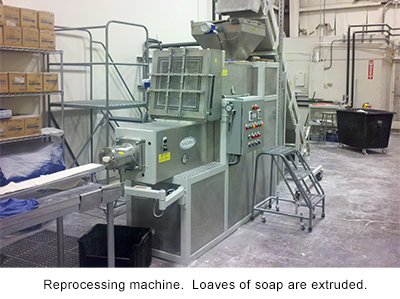 In the under-developed world, lack of hygiene has become an epidemic. Children are dying every day simply because they are not able to wash their hands with soap.  It is estimated that 2.4 million children die each year from preventable diseases.  Daily washing with soap reduces the risk of death from pneumonia or diarrhea by an astonishing 47%, virtually doubling their chance of survival.  In addition to putting a bar of soap in the family’s hands, the project also works to educate people about the importance of hand washing, and to change their behavior to ensure that everyone washes every day.

Like Dispenser Amenities, Global Soap Project is internationally focused with a partner organization in Hong Kong called Soap Cycling, and their newest partner, Global Soap Project-Europe, opening this year in Rome.  Each location has a “factory” that accepts bar soap waste and recycles it into the valuable human health resource that is in such high demand.

“We are proud to be working with this fine organization and delighted to be ‘giving back’ just as our hotel customers do,” says Ian Wallace.  “There could be no higher purpose for hotel waste than saving lives around the world.”