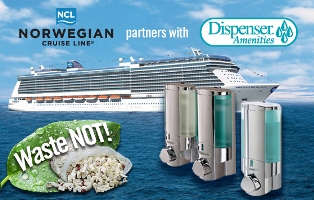 Partners for a Positive Environmental Impact

Dispenser Amenities’ AVIVA Dispensers will be traveling all seven seas aboard Norwegian Cruise Line ships.   NCL’s eleven ship fleet travels every ocean and continent on the planet.  Our partnership with them adds more than 15,000 cruise line staterooms to our list of 100,000 already at sea, outfitted by Dispenser Amenities.

NCL ships Breakaway and Getaway are under construction.  Once completed all 2,200 staterooms will be outfitted with both AVIVA Chrome shower dispensers and vanity dispensers.  Breakaway’s home port will be New York City and will set sail in April 2013 followed by the Getaway one year later.  Upon completion the Breakaway will boast the world’s first-ever sea-bound aquapark.  It will also feature a three-story sports complex, a nine-hole miniature golf course, basketball court, and rock climbing wall.

We are so proud to be partnered with this company that has shown such dedication to eco-friendly practices.  “We congratulate Norwegian Cruise Lines on the addition of the spectacular new Breakaway to their impressive fleet,” said Ian Wallace, President of Dispenser Amenities.  “We are honored to be chosen as a partner in NCL’s relentless efforts to reduce waste.”   NCL was the first cruise line ever to receive the United States Coast Guard’s William M. Benkert Marine Environmental Protection Gold Award.  Aside from using AVIVA Dispensers to eliminate plastic waste from guest amenities, NCL has a list of creative environment practices that revolutionize the theory of eco-smart cruising that is way too long to fit into this blog.  Here are just some:

1.  On board every ship, a dedicated Environmental Officer oversees all of the environmental operations and monitors their performance.

2.  Their ships are equipped with the latest emulsion-breaking oily water separators, which perform a multi-step process to ensure that only clean water, which far exceeds regulatory requirements, is discharged to the sea.

3.  Each year, a team of seasoned safety and environmental experts audit their ships to ensure compliance to all company policies, as well as US and international environmental regulations.

4.  Their ships use low sulfur fuels in environmentally sensitive areas throughout the world to lessen the impact of harmful air emissions.

Once the Breakaway sets sail the NCL fleet will consist of twelve ships containing more than 15,000 staterooms, all of which will be outfitted with AVIVA Dispensers for the shower and vanity.  Offering a disposable single-use-bottle guest amenity program to this number of rooms would result in 14.5 million bottles being disposed of annually.  This number illustrates the enormous environmental advantage that our partnership enables.  Dispenser Amenities’ Global Vice President – Warren Hodgson, is a two cruise veteran on NCL ships:

“My favorite thing about Norwegian Cruises is their unique freestyle cruising scheduling method that gave me a lot more freedom to enjoy my cruise meals and activities in the order that works for me.  The staff’s attention to detail is second to none and the food was amazing!  My favorite port was Roaton Honduras.  This port has a spectacular environment that seems unspoiled and isolated from the commercialized world.  While there, I just spent my time fishing, diving, and snorkeling, in crystal clear waters that allowed me to take in all the beautiful nature below.”

All other staff, here at Dispenser Amenities, are envious of Warren and hope to one day ourselves #cruiselikeanorwegian!