If you paddle down the Amazon River through the rainforests of South America, an intense… stench might waft by your canoe. Don’t jump to conclusions, because it might not be industrial pollution, dumped waste, or decomposing living material. It’s probably the smell of the hoatzin welcoming you to the jungle.

The hoatzin is also known as the skunk bird or the stink bird. This is with good reason, because this bizarre ornithological curiosity reeks like manure, and it’s no wonder: it has a very similar diet to cows. This unusual diet is one of hoatzin’s curious features that have puzzled biologists since the 18th Century, making it a species unlike any other on earth! 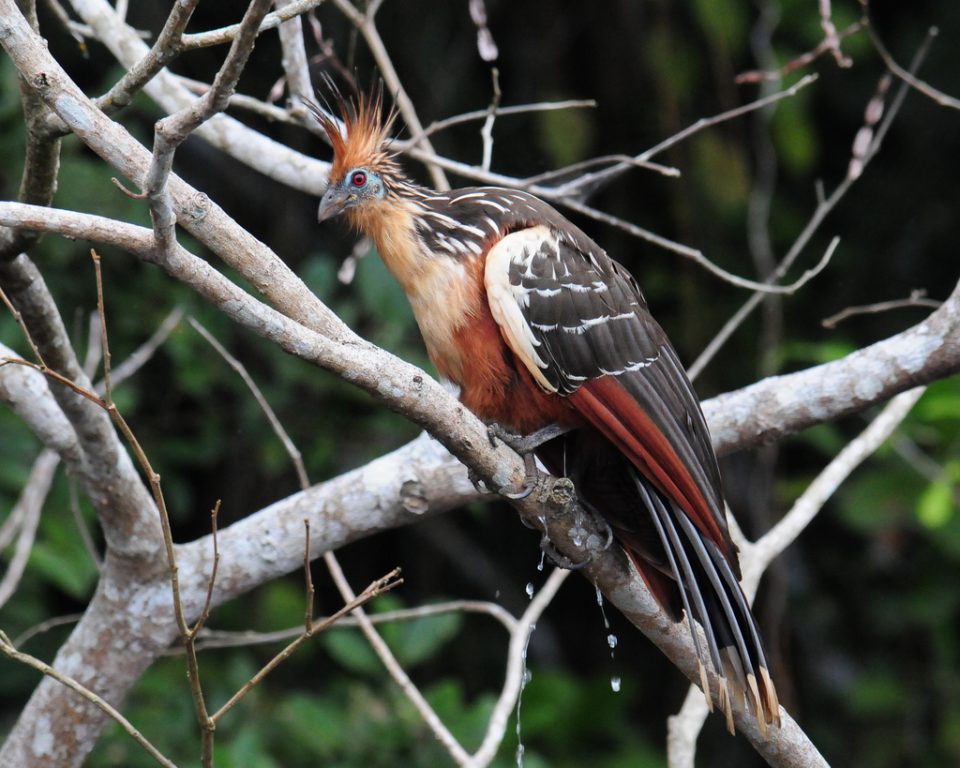 The Unique Diet of the Hoatzin

Bird species have a variety of diets. Many of them are omnivorous, meaning they eat a mix of plants and animals; some feed on live meat, others on dead; hummingbirds feed on nectar, flamingos filter their food like baleen whales, and gulls steal food from other birds (and unsuspecting beachgoers). But no bird eats like the hoatzin, who are more like elephants in their grazing habits than the pheasants they appear to be.

Hoatzins are folivores, meaning they eat leaves, and they’ve evolved a special gullet to digest them properly. Stripping local bushes and trees of their greenery, hoatzins ferment the leaves in a pouch called a crop, and this allows the birds to digest the starchy leaves properly. While the bacteria in the crop helps the hoatzin get the nutrients it needs, it also gives the bird a horrendous smell, similar to the leavings of cattle, which has the added bonus of protecting it from human consumption. 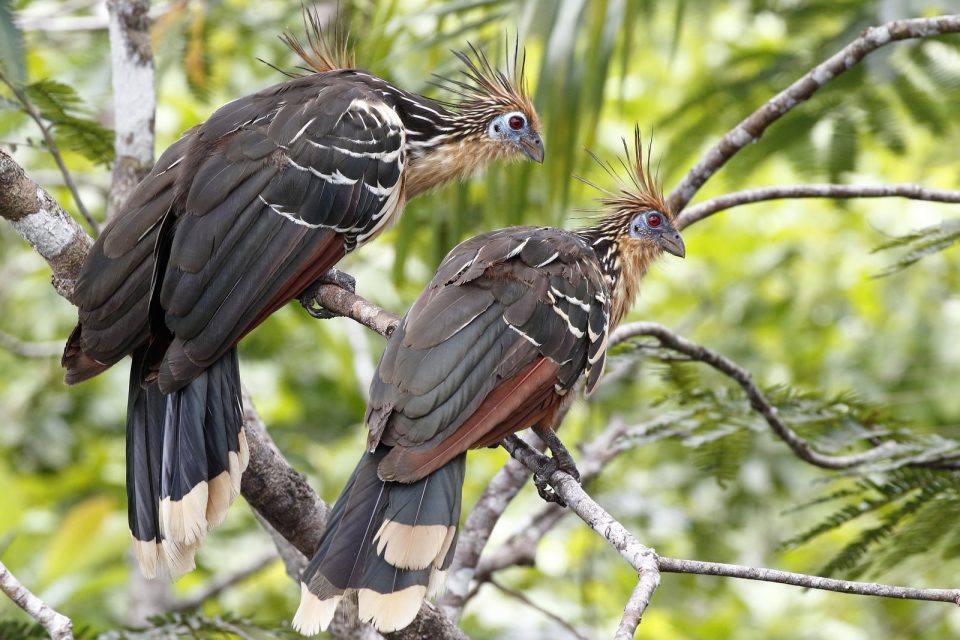 What’s So Bizarre About the Hoatzin?

Other than their strange diet, the hoatzin has a strange appearance that looks cobbled together from brighter, more consistent-looking birds. Covered in orange and brown feathers, with  blue crest and red eyes, it looks like a pheasant with a crown like a Mohawk, and it gives off an array of groans, grunts, and hoarse croaks. But look closer, and you’ll see a bird that has befuddled ornithologists for centuries.

At first, the hoatzin was classified in the same group as waterfowl; later, it was shuffled to the cuckoo family, despite having three front toes and one on the back (cuckoos have two-and-two). A recent, definitive genetic study told us that all of this classification was a waste of time: the hoatzin is the last remaining bird in its species, a type that branched off from the rest of the avian world 64 million years ago, shortly after the extinction event that killed off the dinosaurs.

The leaf-based diet isn’t the only hint that the hoatzin is one-of-a-kind. The chicks are born with two claws on the ends of their wings, claws they end up losing as they mature. They hatch in nests over water, meaning they have to learn how to swim fairly quickly! It’s the final member of the genus Opisthocomus, and as such has no extended family. As a species, it has this in common with Homo sapiens – us – and if it goes, the genus goes with it. Unfortunately, this living historical oddity is becoming more and more threatened by the actions of H. Sapiens, mostly via the trash we throw away.

The hoatzin is a unique animal, one that, though not presently endangered, we should take time to appreciate. Deforestation and poorly-planned eco-tourism have expanded our ecological footprint into the widespread home of the hoatzin. Nowhere on earth is immune to our impacts, and plastic pollution has encroached on the hoatzin nesting areas along the Amazon River, as it has on every aquatic environment. Some 30 tons of trash is removed daily from the Amazon in the river’s biggest city, Manaus, showing how radical the problem has become. To save one genus, ours will have to step up and change its habits. We have not evolved to use plastic, meaning our species can reduce its plastic consumption a lot easier than the hoatzin can stop eating leaves!