The Head Office of Dispenser Amenities is located in London, Canada, a city of nearly 400,000 people located in Southwestern Ontario, about half way between Toronto and Detroit.  And like the London on the other side of the Ocean, our London has lots of names borrowed from them, like Oxford Street, Piccadilly Street, Hyde Park and the Thames River.  Our river is an eco-system onto itself with a variety of fish and reptiles that call our Thames River home.

Spiny Softshell Turtles are  medium to large-sized freshwater turtles that make their habitat along the Thames River, and can be found across Ontario and Western Quebec.  With its flat soft shell, tubular snout and large nostrils, The Spiny Softshell Turtle often attracts public curiosity.  It is however, a shy and nervous creature that is one of the most highly endangered species in Canada.

The latest population estimates show that there are probably less than 2,500 Eastern Spiny Softshells in Ontario and possibly less than 100 in Quebec. Predators, receding shorelines, and recreation activities threaten the survival of this species.

Early studies along the Thames River revealed that one of the major factors that has caused this turtle species population to plummet is an almost zero turtle egg survival.  Very few hatchling turtles reach adulthood, and therefore it is important for biologists to protect the eggs and release as many hatchlings as possible.  The vulnerability of this species is further amplified considering that it only reaches sexual maturity at the age of twelve.  Existential threats to The Spiny Softshell Turtle also include loss of habitat, people collecting them to have as pets, food trade and getting caught on fishing hooks.  The turtles are extremely vulnerable to traffic mortalities as they freq

uently cross roads.  Increasing urbanization and climate change has also caused habitat loss for the species.   Moreover, the turtles often fall prey to predators like raccoons and coyotes.  Due to the loss of wetlands, the turtle populations are increasingly becoming more isolated from each other thereby preventing gene flow between turtle populations.

There are a number of organizations that have begun to actively participate in initiatives aimed at protecting The Spiny Softshell Turtle.  One of the organizations that is at the forefront of the conservation efforts is The Upper Thames River Conservation Authority (UTRCA).  UTRCA, also known as Turtle Team, is one of the longest running and most successful reptile research, recovery and education programs in Canada.  Since egg protection began in the 1990s, The Spiny Softshell Turtle population has shown increases in the number of turtles of all age classes.  The Nature Conservancy of Canada (NCC) is also actively involved in several initiatives to protect the species through habitat protection, restoration of protected areas and stewardship. The NCC also coordinates groups of volunteers that conduct cleanups of spawning sites, monitor turtle nests and collect eggshells.  The organization has also been involved i 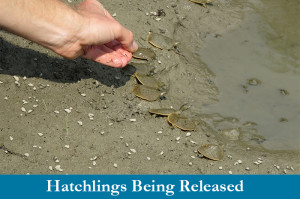 n an incubation program since 2009. The program seeks to increase the hatching rates of the turtle by artificially hatching the turtle eggs and then releasing them into the wild.

This year’s effort by the UTRCA Turtle Team has resulted in unprecedented success.  They have just released 3000 Spiny Softshell Turtle Hatchlings into the river, by far their most successful release since their efforts began in the early nineties.  Eggs are harvested from the nests to prevent predation and loss by flooding, illegal collection etc. and incubated in specially designed incubators.

While threats are increasing each year, several strategies have been developed to counter some of the drastic losses experienced across the species in Canada.   The provincial and federal governments and other non-governmental organizations have committed to providing funding to ensure the conservation programs continue throughout 2015.  Organizations like the UTRCA are also studying the collective turtle population and are actively seeking to improve the quality of water along the Thames watershed so as to protect all wildlife that makes their habitat along the river.  The local communities have also chipped in by forming a strong network of volunteers

and donors that have been able to reach and protect a greater number of wildlife and habitats.

We are proud to say that Dispenser Amenities has committed donations to the Turtle Team this year to purchase two additional incubators, two GPS units which are used to find and track the mature turtles and one PIT Tag Scanner which is used to scan the microchips that identify the turtles.  We want to support this most important recovery effort and they need donations to carry on their critical work.