On May 11, 2013, The Nature Conservancy of Canada (NCC) held a recognition event on Pelee Island in appreciation of the donations by Dispenser Amenities to help fund the ongoing conservation efforts carried out on the Island by NCC.  The event coincided with the Spring Song Bird festival that is held annually during the peak of spring migration where teams on bicycles list the species that they see in a 24 hour period from noon Friday to Noon Saturday.  The winning team always has seen well over 100 different species in this “day”. 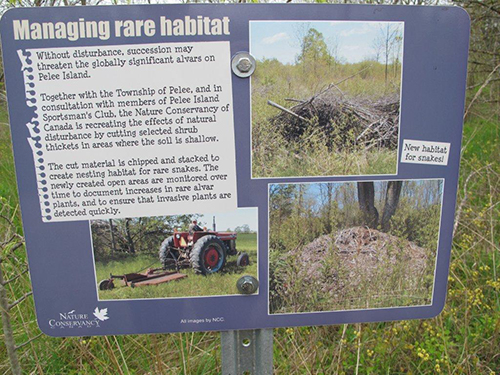 have now restored some 50 acres (19 hectares) of forest and shoreline as well as a relatively new parcel which is being changed from agricultural field to native forest.

Mhairi McFarlane proudly says, “Every native tree we plant is there to help the migrating and endemic birds and wildlife have an easier, better existence, whether they just spend a day on the island or a lifetime.”  Mhairi, Jill and countless other staffers and volunteers have made great strides in controlling such invasive species as Garlic Mustard in the forests and Common Reed along the shorelines of the lands they protect.  They continually plant seedling trees and other native species to improve the bio-diversity of the Island.An initial donation to the Conservancy by Dispenser Amenities is being used to upgrade the Ivey Research Station which is used both as living quarters and research area for those working on the Island.  Biologists use the station to coordinate various seed distribution and research initiatives that are an ongoing part of their work.  When we visited the station we met a pair of graduate students who were studying the very rare Blue Racer Snake which is believed to exist only on 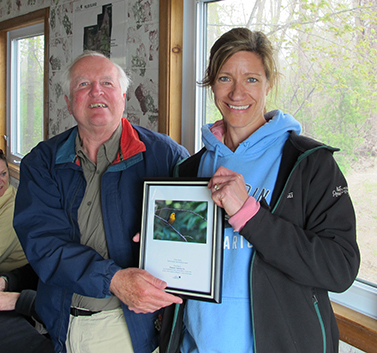 Pelee Island.  As we enjoyed a delicious lunch, they were thrilled to tell us that they found two more Blue Racers that morning.

The Nature Conservancy presented Ian Wallace with an inscribed photo recognition which we proudly display in our office.  As well, a permanent signage panel on the Island beside the Ivey Station and Middle Point Woods protected area tells all visitors of the help provided by Dispenser Amenities thanks to our many customers.