Last week Dispenser Amenities eco-travel team members JT, Mike, Michelle, and Alex were at Algonquin Provincial Park in northern Ontario.  It is one of the world’s biggest nature reserves, covering 7,653 square kilometers (2,955 square miles), and is habitat for wolves, bears, and most of all moose.  Needless to say she was a little nervous about the whole thing.

JT is a 2.5 year old Miniature Dachshund.  Although she’s very shy of strangers and pretty mild-mannered, you would not be able to tell the way she was tearing around the park.  The second she arrived in the park she was overwhelmed by confusion.  “Why had we suddenly moved to the forest?  This is just awesome!”

As soon as we got the tent set up JT was very confused by our new accommodations.  “It is so much smaller than our old one and the walls are so soft?  This is all so strange!”  She was very happy about the extent we went to, to make sure the trip was eco-friendly though.  We froze huge blocks of ice with baking molds in the freezer to help us avoid having to buy the ones here wrapped in disposable plastic.  We also stored all of our food in reusable Tupperware containers.  We even brought JT her own refillable drinking bottle so she had water on our hikes! 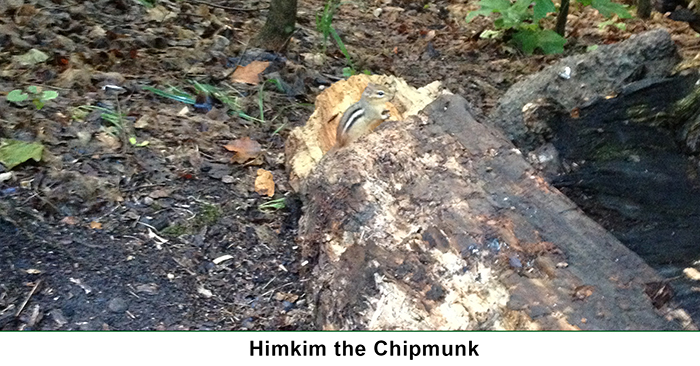 Her first night there JT made a new friends: A chubby little chipmunk and a fox.  She was a little nervous of fox.  I spotted him, with a flashlight, in the dark while everyone else was at the washroom.  He was pretty mangy looking and not much bigger than JT.  I think she liked the chipmunk much better and he 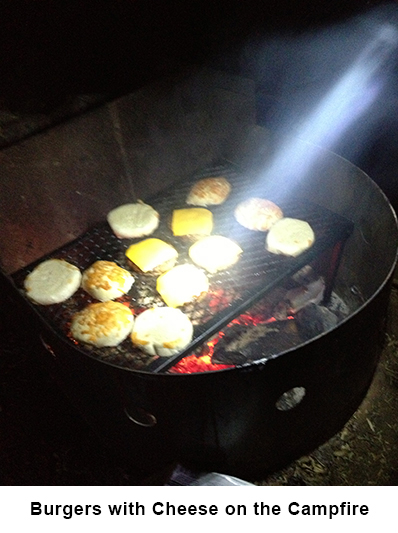 was affectionately named Himkim.  He came around all of the time, almost exclusively when we are cooking on the campfire it seemed.  JT LOVED the campfire food!  Cooking there seemed so much cleaner than burning propane or coal, and much more delicious!  The first night we had hamburgers with BBQ sauce and cheese.  Himkim kept trying to sneak in the pieces that everyone gave JT, so she chased him away.  Everyone knows it’s illegal to feed the wildlife in a Provincial Park anyway, so she figured she’d just save him the disappointment. The next morning we woke up to a rain shower and to the fact that our tent was slightly less than waterproof thanks to a flat portion on the roof.  Water was dripping right in the middle where JT sleeps (thanks a lot Broadstone Inc.)!  We solved this problem by pushing on the roof where the puddle formed, forcing the water to run off of the side of the tent.  However, that became ineffective when the shower developed into a thunderstorm.  I then had to play hero, going out to brave the storm while stringing up a tarp from the treetops above our tent. 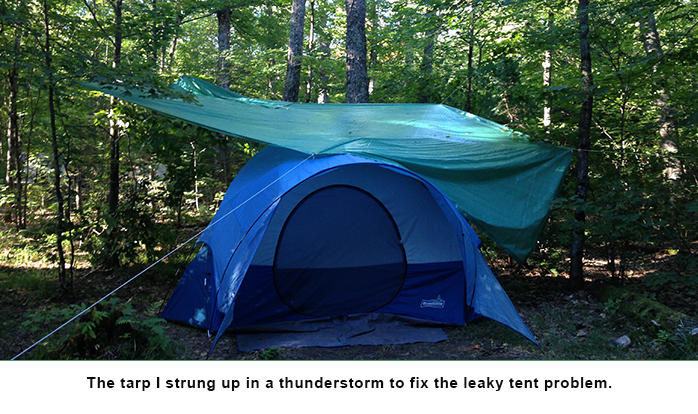 After spending most of the day in the tent, the rain let up enough for us to take JT for her first swim.  I was so proud because as soon as she touched the water she began swimming.  Even when we lifted her out of the water, her legs kept paddling LOL!  She is sort of a one-directional swimmer though, heading only towards shore. We did coax her into the water once on her own by telling her she was a good girl until she got excited enough to quickly swim out to us and then immediately turn back for shore. 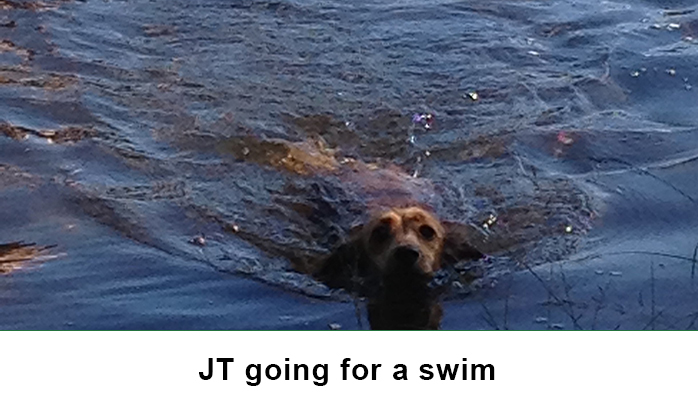 We got back to the site and lit a fire to cook dinner but another flash storm hit right as we were ready to put the steaks on.  It was over as quickly as it began and the fire was actually still partially lit.  We rebuilt it and cooked ourselves some delicious steak and corn. 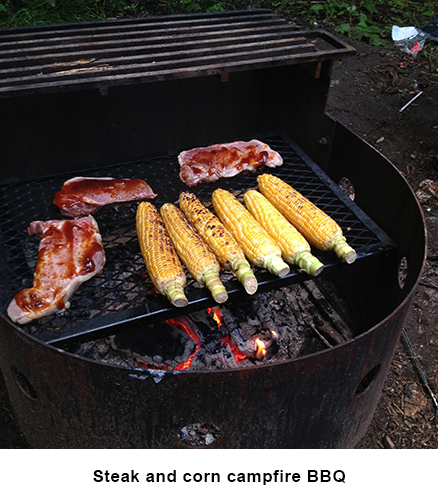 The next day was our big canoe journey five kilometers into the interior of the park.  This was the highlight of the trip for me.  The scenery was breathtaking!  We paddled along the shore of Lake Opeongo past many of the interior campsites.  I became quite jealous of the quality of the sites and immediately swore the next time I camp in Algonquin, I’m staying in the interior.  The campsites there were just huge and right on the water with no neighbors!  We parked the canoe at one and I took a swim.  The poor girls were cold in the morning and didn’t bring swimwear so I was swimming alone.  JT came in with me for her second time ever and then went on a good spazzy run around the campsite and forest to dry off. 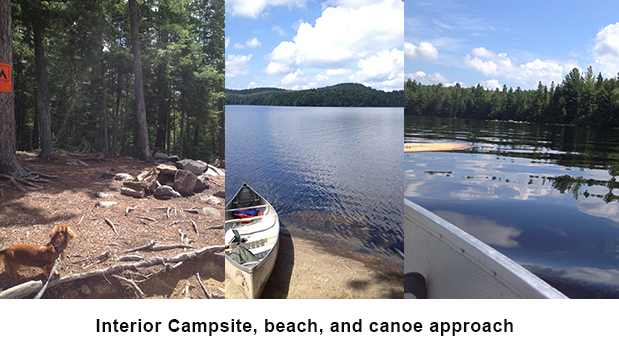 On the way back to our site, we saw a moose grazing along the side of the highway!  The poor thing must have just escaped an encounter with some wolves because we could see some fresh bloody bite marks on the back of her legs.  I wonder what the wolves looked like after this battle?  The moose was pretty big and did not seem too shaken from the encounter, going about her grazing despite the growing number of spectators approaching. 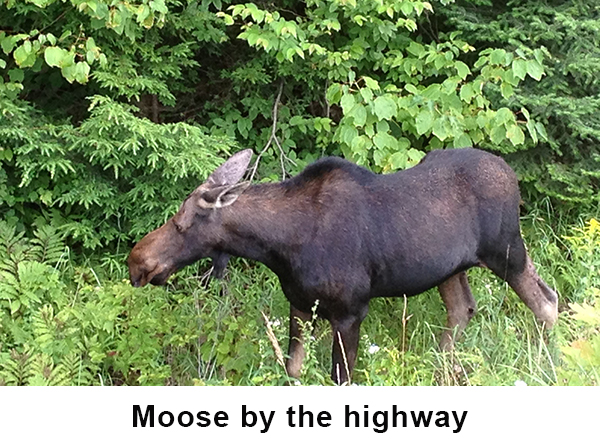 When we got back to the site I was treated to the special recipe of Michelle’s grill-irons.  This is basically a campfire-cooked pizza pocket.  Pizza sauce, fresh sliced pepperoni, and grated cheese are all loaded in-between two slices of bread, buttered on the outside, squished together with the irons, and then placed in the coals to seal.  I loved them! 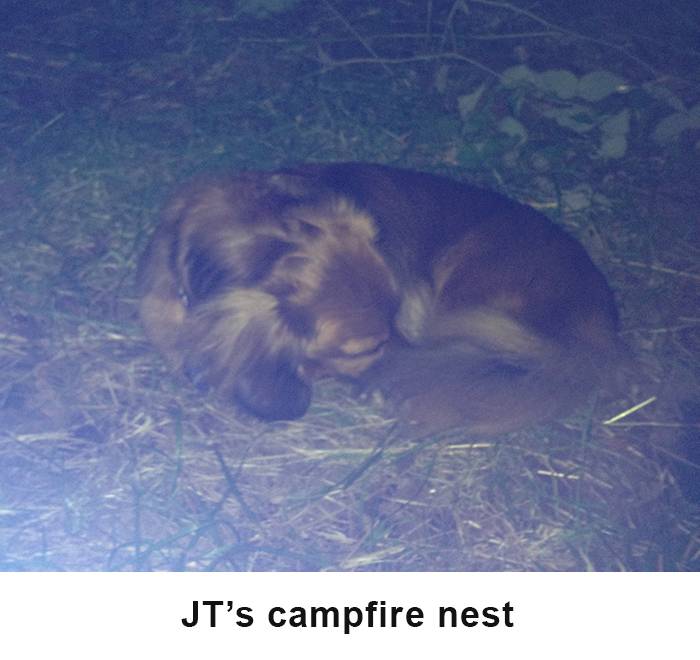 JT had decided that she really likes campfires by this time and has made herself a little nest on a grassy patch the perfect distance from the fire.  She didn’t quite understand the concept of fire yet I think as she let out a little squeak when she walked to close to it and looked quite offended.  It wasn’t enough to turn her off of the experience though as she was not actually hurt.  She was still loving the fire for the rest of the trip.

Our final day there was our hiking day.  We hit three trails: Beaver Pond, Hardwood Lookout, and Peck Lake.  The Beaver Pond trail was our favorite except for JT who liked Peck Lake the best.  I had to trick everyone into walking the full lookout trail, as the popular idea was to walk the trail backwards, see the lookout, and then go back the way we came.  I just started heading down the proper way telling the girls that was the fastest way to the lookout.  Beaver Pond actually has a better lookout than the Hardwood Lookout trail with a big cliff at the conclusion overlooking half-a-dozen beaver lodges.

JT loved the Peck Lake trail the most because we hit that one right at dusk.  Since there was no big cliffs on this trail, I convinced everybody that she would be okay to explore this trail off the leash.  She took full advantage of this opportunity, acting as a trailblazer for the rest of us.  Tail wagging frantically, she ran back and forth, top speed, just in front of us the entire way.  I even got her to come out onto a fallen log over the water.  We made it back right at dusk for our final campfire meal of sausages.

The next day we were all sad to leave Algonquin, especially JT.  I don’t think that she really ever understood what was going on.  Having moved before in her life, she might have thought that this was the same idea and we had now relocated to the forest.

Algonquin is a great park.  We are considering this trip a practice journey, with the next one bringing us into the park’s interior.  The park is very good for handling the amount of tourism they get, making sure that all of their eco-friendly practices are visibly posted and well explained.  They have a badge reward system that seems to excite the children while teaching them to responsibly enjoy the park and safely behave around the animals.  They also have an excellent recycling program with a huge row of bear-proof garbage and recycling bins in each campground.