Plastic Pollution is one of modern day’s biggest environmental issues.  The widespread use of disposable plastic to deliver single use products, such as bottled water, grocery bags, and amenity shampoo bottles, has caused public outrage over the environmental disasters caused  by the leftover plastic:

1) The five gyres are enormous collections of floating garbage brought together by ocean currents.  They create a huge obstacle for marine wildlife who become entangled or overwhelmed when trying to cross through.  The plastic, after years spent churning in the current, has also began a transformation into what is called “plastic soup”. 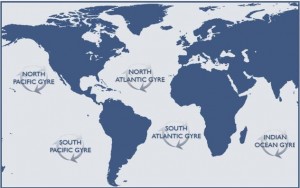 Because plastic is so incredibly durable it cannot decompose in the ocean.  Instead it breaks down into very small components making a frothy soup in the water.  This soup then mixes with marine foods such as algae and is consumed by oceanic mammals and fish.  Now having entered the food chain, the plastic becomes an unstoppable Biohazard as it is consumed by any number of animals and even people who feed on the fish that have eaten the plastic.  To discover this issue in all of its horrifying detail visit http://5gyres.org - a group of dedicated scientists, writers, and speakers committed to raising awareness about the issue. 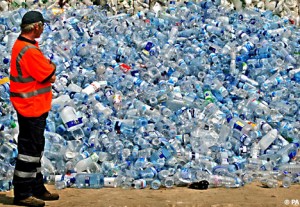 2) Landfills are filling up three times as fast as they would be without the problem of disposable plastic.  Recycling has been the “go-to” method, to this point, of dealing with the issue but it simply isn’t working in most cases.  In 2010 only eight percent of plastic waste in the United States was recycled (http://www.epa.gov) leaving 28.5 million tons that will end up in landfills or the ocean. This percentage is closely duplicated in most developed countries and far worse in underdeveloped countries.

3) Polluted beaches are popping up all over the world ruining both the enjoyment they bring to people and the fragile coastal ecosystem.  Birds have particularly been affected as can been seen here in this video detailing how Albatross on Midway Island (situated right in the middle of the North Pacific Gyre) are being killed by disposable plastic washing up on shore .  Simply cleaning up the beaches is not a solution because the waves and tides from the ocean are bringing an endless supply of fresh pollution to the shoreline.

4) Under-developed countries with less sophisticated waste management programs are, in some cases, being overrun by plastic pollution and in particular, excessive waste from tourism!  Take a look at this horrific example in the Maldives where and entire island is overflowing with tourism trash!

There is a SOLUTION!