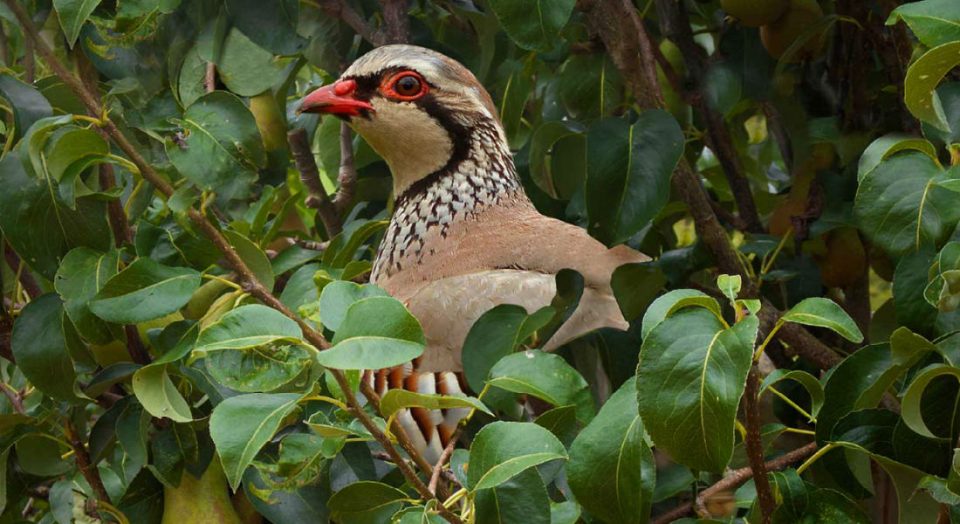 Partridge In A Pair Tree

How often did you sing the line “…and a partridge in a pear tree!” this Christmas? It’s a pretty ubiquitous seasonal phrase, though we often sing it without thinking about what the partridge is doing in the pear tree. Grey partridges, little orange-and-grey birds referenced in the song, love to live in groups known as coveys and are really awful at flying, so you aren’t likely to find them perched in a tree. Unfortunately, their populations and non-pear tree habitats are also shrinking more and more each day. Much more than a humble bird in a song, grey partridges are a bellwether bird species that signals a huge loss of important ecosystems!

Why A Partridge In A Pear Tree?

First, let’s decipher the lyrics to The Twelve Days of Christmas. Starting on Christmas Day and going until January 5 (the end of the traditional Christmas season and the beginning of the Christian celebration of Epiphany), it runs through a very expensive, very unnatural list of gifts: leaping lords, milking maids, twelve drummers drumming. After all these, a simple partridge and pear tree combination seems relatively easy to pull off, right?

The Twelve Days of Christmas is a really old song, first published in 1780, so many carolers just assume that partridges and pear trees went together like peanut butter and jelly, but that’s not true! The Twelve Days of Christmas is an English song that’s thought to be of French origin, with the first published version being found in a children’s songbook titled Mirth without Mischief from 1780. A lot of different explanations abound, with many people believing it’s a coded song referencing Catholic catechism (with the partridge standing in for the baby Jesus). However, the prevailing theory now is that The Twelve Days of Christmas is actually a French children’s memory game, where if you messed up one of the lyrics, you’d be “out”. “Partridge in a pear tree” comes to us as a corruption of the French word a partridge: une perdrix. Say “perdrix” in English and it sounds a lot like “pear tree”!

So what we’re left with is a nonsense song with odd lyrical choices designed to mess up the singers. But we still have those iconic images, including “a partridge in a pear tree”. Is such a gift possible? It would be very difficult, because you’d have to force the partridge into an uncomfortable position to get it to stay in the pear tree. Every species of partridge, including the grey partridge, is what’s known as a “ground nester”, meaning they lay their eggs and make their homes in fields and grasslands.

Our Impact On Grey Partridges

A “partridge in a pear tree” is becoming a harder gift to give, in part because partridges themselves are getting harder to find in many places. Grey partridge populations in Great Britain and Ireland have steeply declined as much as 85% in some regions over the last 25 years. This is because, as mentioned, grey partridges nest on the ground, making them susceptible to ground pollution and human encroachment. On top of this, the removal of their grassy nesting habitat as farm fields and the widespread use of herbicides in the 1950s destroyed many weeds that were food for insects. By the 1980s, chick numbers dwindled as the insects used to feed them died off, leading to the low populations struggling to survive today.

Now, you’re most likely to find grey partridges on properties known as shooting estates, where they are raised and protected for the benefits of hunters. Since they love living in groups, they make for great hunting targets. Conservation efforts are trying to reinvigorate the population in the wild, but the loss of breeding areas and food supplies mean it’s still on the British Birds of Conservation Concern list. In Ireland, it’s considered “critically endangered”.

The partridge might not enjoy living in a pear tree, but it definitely would like a pristine, natural environment. Preserving bogs and grasslands, as well as keeping plastic off the ground away from its nests, would definitely be the best gift for it in the new year!