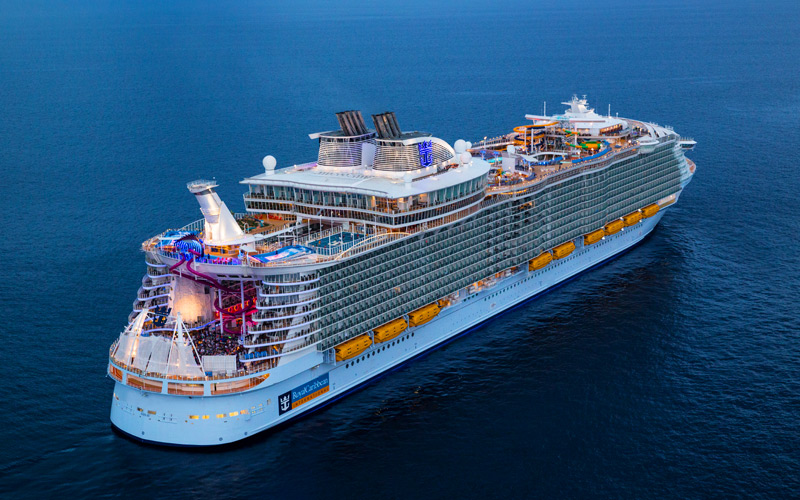 During her first season, Symphony of the Seas will sail from Barcelona, Spain, on a seven-night Western Mediterranean cruise. On 28 October, 2018, she repositioned to her home port, the Port of Miami in Florida, United States. In November 2018, she began Caribbean cruises.

Royal Caribbean has found several ways to improve even further on the energy efficiency of Symphony when compared to its sister ships Oasis and Allure, which were built on the same platform.

The new Symphony of the Seas represents a whopping 25% leap in fuel efficiency per available passenger day compared to a ship like 2010’s Oasis-class Allure of the Seas. The new world’s largest cruise ship has just 85 MW of generating capacity, down from 100 MW on Allure of the Seas, and not all of that will ever be needed. This means less fuel burned and, therefore, reduced greenhouse gas emissions.

Part of this improved efficiency is due to the implementation of a new system that releases tiny air bubbles or rather millions of tiny bubbles known as an “air lubrication system.” These bubbles coat the ship’s hull, creating a blanket between the ship and water while reducing drag to make for a smoother and more efficient ride (bubble technology).

Further, no incandescent lights are used, only LED or fluorescent bulbs. Incandescent bulbs produce a lot of heat, so the air conditioning system has to work harder. The air conditioning systems on Symphony are more localized, so energy isn’t wasted blowing the cold air around the ship from a central location. Another advance is a waste heat steam generator that captures heat from exhaust gases in the smokestacks to heat water for uses on board.

The level of sanitation goes above and beyond. Every part of the ship, from lift buttons to the casino’s chips, are sanitized daily; interior materials have to stand up to the high level of chlorination from the constant cleaning. Rubbish is frozen in vast storage containers to slow bacteria growth and then only removed when the ship is in port.

Royal Caribbean are continuing their environmental efforts aboard every ship through their Save The Waves program, and encourage each guest to play their part, before, during and after their vacation. Stay tuned as there are more environmental updates to come!