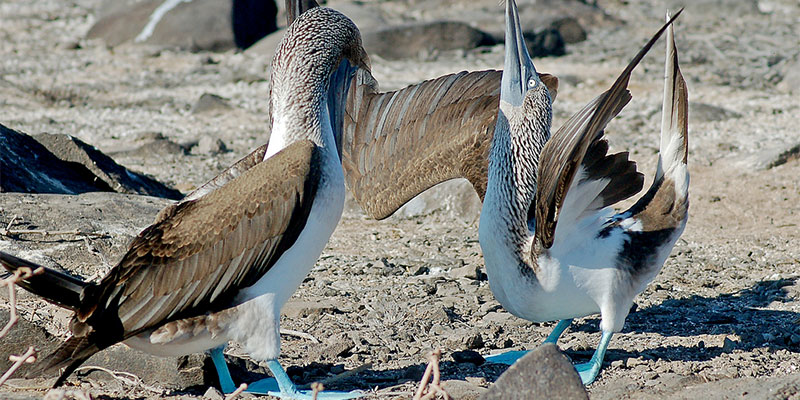 The Mating Dance of the Blue Footed Booby

The Galapagos Islands is a beautiful ecosystem full of amazing animals that can’t be observed almost anywhere else. One such animal is the graceless, adorable blue-footed booby – a marine bird that uses the islands as a nesting spot. Their mating antics and comfort around humans make them a favourite among tourists, but the fragility of their environment means even the people who don’t get to see them up close have to make the right choices to protect them.

The Clown of the Galapagos

The blue-footed booby has an absurd-sounding name because of how ridiculous the bird is; “booby” comes from the Spanish bobo meaning stupid or clownish. The first Spanish explorers to meet these odd birds were struck by how fearless they seemed (and still seem today) and by how strangely they act on land. While they’re superb flyers and divers, the booby still has to make a bumbling, awkward attempt to walk in order to mate and lay eggs. Its mating ritual shows how right the Spanish were to give these birds their name!

The mating habits of the booby revolve around their funny dance and the male’s bright blue feet. These are his best features and the male’s dance – a high-step strut with his beak down – is designed to impress the female. He then presents her with some nesting materials, gives a loud whistling noise, and finally completes the ritual with more dancing.

It’s the blue feet that really do most of the work, though, and their size and colour are the biggest determinants of successful mating. Boobies use their feet to incubate the eggs, and the larger the feet, the larger the area that can be kept warm. The bright blue feet come from the carotenoids, a type of antioxidants, in their fish-heavy diet. The brighter the blue, the healthier the bird, and ornithologists have determined that males with brighter feet have more offspring!

The Threats to the Blue-Footed Booby

Much like the other animals on the Galapagos Islands, the population of the blue-footed booby is under threat. The numbers have plummeted from over 20,000 birds in the 1960s to roughly 6,400 today, and much of this has to do with a drop in reproduction. Unlike the dodo, it’s not the booby’s genial nature and fearlessness around humans that’s harming their population; it’s the encroachment of humans, both directly and indirectly, on their habitat. The first threat is that blue-footed boobies are having a hard time finding food. Sardines, the boobies’ favourite food, have had their populations collapse due to both legal and illegal overfishing. This drop in both sardines and the booby populations is having repercussions for the biodiversity of the Galapagos and the animals above and below them in the food chain.

The second major threat is something that’s affecting islands all over the world: plastic trash. Half of the plastic in the ocean is disposable, and will persist in the environment for hundreds of years, breaking down into smaller and smaller pieces that get into the food chain. Plastic washing on the shores of the Galapagos has been found in the nests of the famous finches that helped Darwin develop the theory of natural selection. It is even being found in the stomachs of albatrosses and sea turtles, who either accidentally ingest the plastic or confuse the particles for food.

The fragile ecosystem of the Galapagos needs protection, and while the Ecuadorian government and NGOs are doing a lot to preserve this small bit of paradise, they can’t filter out the small bits of plastic that are carried there on ocean currents. Preserving the dance of the blue-footed booby, as well as thousands of other animal rituals around the world, requires everyone to chip in and make the right choices.