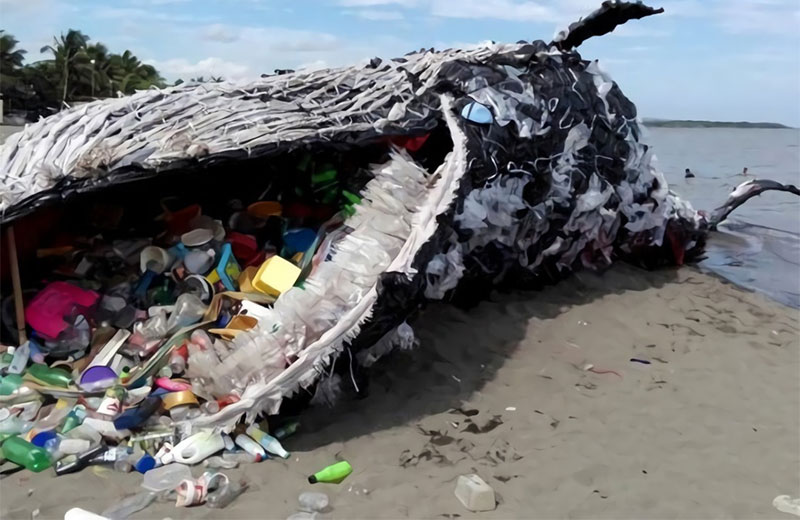 It can be hard to fathom the problem of plastic in the world’s oceans. They are such vast places, and the disposable plastic we toss away is so small, it’s difficult to visualize the more than 8 million tons that end up in aquatic ecosystems every year. Art commissioned by the Mote Marine Laboratory and Aquarium in Sarasota, Florida was designed to help us see just what is ending up in the oceans, and to get us thinking about the ways we can reduce disposable plastic consumption.

“Sea Debris: Awareness Through Art” was an exhibition held by by the Mote Aquarium to educate the public of the sheer scale of the plastic problem and reusing what washes ashore in a creative way. Made from plastic debris found on the shores of Oregon, these large sculptures were given names like Greta the Great White Shark and Natasha the Turtle.

“Plastic products in sea water can break down into tiny microplastics that may be swallowed by marine animals,” says the Mote Aquarium’s website. “Derelict fishing gear, such as monofilament line, can entangle or be ingested by animals such as sea turtles, dolphins and other marine life – causing injury or even death. Marine debris can also damage important habitats.” The creation of these large art projects hopefully will help the public think twice about their plastic habits.

The “Sea Debris: Awareness Through Art” exhibit is just one of many creative initiatives around the globe trying to highlight the enormity of the situation. Earlier this year, Greenpeace Philippines created “Dead Whale”, a public art installation on a beach in Manilla depicting the carcass of a right whale as if it had died of plastic intake and washed ashore. It’s a visceral depiction of the problem, but the truth of the matter is much harsher than the art it inspires.

Many large species that have been keystones in their ecosystems are now on the brink of extinction. Scientists are concerned about the population of the right whale, as no new calves were spotted in the North Atlantic for the first time since the 1980s. The right whale was once a popular target for whalers because they move slowly near the surface, but now the whale suffers from the indirect threats of pollution and ship traffic. If the mortalities continue, some models show the species going extinct by 2040.

It’s not just the right whale, either. All large marine mammal species are affected by the plastic that ends up in the ocean. In May, a pilot whale off the coast of Thailand died after being found with more than 80 plastic bags in its stomach. It’s a problem with such a massive scale, the whole world needs to take action to solve it.

The problem is that we only know our own habits. The plastic that makes up a huge part of our lives is also the plastic we forget about as soon as we toss it away. But there are billions of people on this planet with the same problem, and few are thinking about what their actions do in conjunction with others. The artwork at places like Mote Marine Laboratory and Aquarium will hopefully help us visualize the issue for ourselves, and give us a sense that if we are to solve the disposable plastic problem, we’ll all have to be in it together.