The first step is to remove the fence sections from the post so that you now have just the free-standing post.  Now dig a shallow hole around the post.  This hole must be deep enough to be able to see the top portion of the cement base of the post.  I found it is best to dig a wide hole around the post using a full sized steel shovel then to switch to a gardening-sized short-handled shovel to clear out the area directly beside the cement base.  As you can see in this photo, once you get to the cement block you only need to clear out enough dirt from the sides of it to get a steel cable around it.  The next step is to cut the post off where it meets the cement. 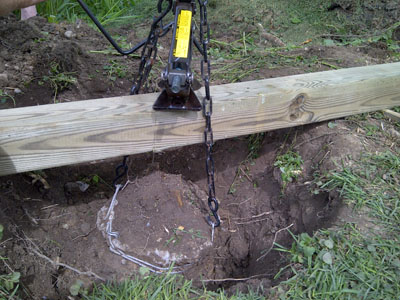 Now wrap a steel cable around the cement, knot it and back-feed it so that, when pulled, on it will tighten like a noose.  Be sure to get the cable down far enough that it will find some irregularities in the cement to latch itself to when it begins to tighten.  Next, place a solid platform (in this case a 4×4) across the hole.  Make sure that it is relatively level, both horizontally and vertically.  Wedge pieces of stone or wood underneath the edges to level it if necessary.  It is very important to place the car jack at the center of the weight load and attach the cable to the top of the jack on opposite sides of the block.  A car jack is only meant to support a load where the weight is pushing straight down on it at a 90 degree angle.  If you notice that the jack is starting to lean one way or the other you must stop, release the weight, and adjust the position that the jack is sitting on the platform so that 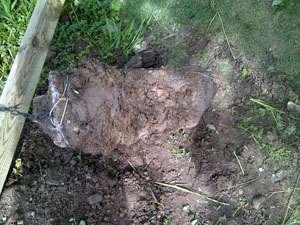 the weight is evenly distributed.  Once you have it properly positioned, all you have to do is slowly crank the jack up and pull the cement base out of the hole.  Once you notice a movement of the block you are home free.  The Jack will not pull the block completely clear of the hole because the top of the cement will contact your platform, but at this point it will be so loose that two men can lift it out by hand.

I have done this twice now and I think it is a great way to get the job done while sparing your back.  I am concerned however, that on both occasions I have done this, I have found pieces of plastic garbage underground.  This time I took pictures.  My brother and I removed a broken pole from the fence in our parent’s back yard.  My parents moved in to this house in the year 2000 and from the look of the fence it was at least 5 years old when they got there.  This means that the garbage 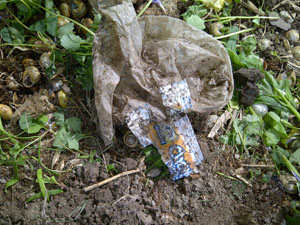 I found has been buried for a minimum of 17 years and has not even begun to breakdown!  The writing on the package is still legible.  I’m wondering to myself, how much plastic junk is there buried underground?   If this stuff lasts forever, what kind of impact does it have on the environment when it’s buried?  If I found 3 pieces in just this small hole, there must be quite a lot buried around the globe.

The only way to stop plastic pollution is to refuse to use disposable plastic and products that come wrapped in it.  I already know it’s clogging up landfills and Oceans; now during this fence post project I learn that there is probably a large amount of plastic buried in the Earth.