In early spring last year, when Steve Heinle, Director Hotel Operations and Divisional Corporate Services for HAP Hotels contacted Dispenser Amenities to investigate switching his hotels’ amenity programs from little bottles to Dispensers, his goal was to eliminate the plastic bottle waste from the system.  It was a natural thought, to protect the magnificent natural environment that is the draw for his customers.  But that was just one benefit that the change delivered.

HAP is the acronym for Holland America-Princess and while they certainly operate their cruise business as separate competitive brands and do the same in their hotels, the group of hotels in Canada’s Yukon and America’s largest state, Alaska, do work under one set of management, located in Anchorage.  This chain of thirteen hotels operates in a very interesting way to a very specific market.  They serve the guests on the Cruise lines before or after they have had their Yukon-Alaska cruise experience, offering a delightful menu of tours and expeditions in the interior of the territories.  But, once the cruise season ends in la

te September, these large, bustling properties close…completely.  They even turn off the heat, so rooms could get to minus 50 degrees, and that presents an obvious challenge for liquids in Dispensers.

In early September, Ian Wallace and Heather Manness of Dispenser Amenities headed north to Alaska to visit the people of Princess Hotels and Westmark Hotels (the Holland America brand) and learn about their business, their customers, their beloved natural environment and their Dispenser Amenities program at work.  It was a most delightful working adventure, indeed.  The flight from Detroit via Seattle and Anchorage touched down in Fairbanks sixteen hours after they drove away from London, Ontario.  It was a very quick rental car drive from the airport to Fairbanks Princess Riverside Lodge, a modern-looking two-storey facility with 326 rooms, although you would never imagine that, as you approach.  It sits nestled in a picturesque location on the banks of the Chena River which runs through the city.  On arriving, Ian and Heather got their first glimpse into what is a very unique operation.  Several busloads of guests were arriving at the same moment, after a day of exploring.

That is the everyday life of the HAP hotels.  Their guests arrive either by train or coach by the hundreds, sometimes at 8:00 in the morning, sometimes at noon, other times too.  Not many hotels are tuned to accepting 200 guests at one moment at 8:00 in the morning, but these hotels take it in stride, day after day.  With special tour areas, lots of lobby room for sitting and chatting, games tables and fireplaces and huge lounges, the guests gather and enjoy each other’s company.  In Fairbanks, they m

ay be scheduled to go dredging for gold or take a paddle-wheel riverboat ride.  Evenings might be planned for an Alaska Salmon bake and theatre.  There is non-stop action throughout the day.

The next morning, our people met David Arnott, General Manager of the property and Desiree the head of Housekeeping , to discuss the Dispenser program.  They were completely delighted with the AVIVA Dispenser operation, with the WAVE Shower Liquids and with the Guest satisfaction.  There were no complaints from any quarters and Housekeepers, mainly men, gave us a thumbs up from their side too.  These reviews were to be heard repeatedly, throughout the trip.

After checking out it was a short drive across the city to the Westmark Fairbanks, a 400 room hotel.  This property was about to say farewell to busloads of guests and literally hundreds of sets of luggage were neatly tagged and aligned ready for departure.  Quite a system.  After an enjoyable chat with Alexa Reichel, Assistant Manager Housekeeping, and a tour to see the Dis 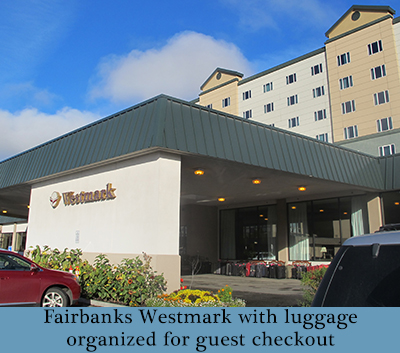 pensers in action, Ian and Heather began their drive south, heading for Denali, in dense fog but it soon broke and an absolutely gorgeous two-hour trip unfolded before their eyes.  The birch trees had changed to brilliant yellow and the mix of colors of the evergreens, red ground cover and bright yellows throughout the valleys and up the mountains and along the streams and valleys was simply breathtaking. 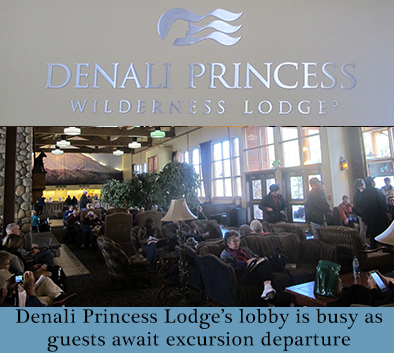 The Denali Princess Wilderness Lodge was the next stop, a magnificent 656 room facility designed in many separate buildings along the rapids of the Nenana River.  The spectacularly appointed lobby and lounges were packed with guests ready to embark on their afternoon adventures to visit Mt. McKinley by plane or helicopter, go down the river by jet boat or raft, head to the back country by Jeep or covered wagon…the choices were endless.

Heather and Ian were welcomed by Hotel Service Manager Kristin Wells and Housekeeping Manager, George Sprenger, and again heard about the complete delight of the staff and the guests with the Dispenser Amenities program.  Completely trouble-free, easy to look after and always good looking, the Dispenser is the perfect answer for timesaving room turns when hundreds of guests get off the train to check in at the same time.  Like the others, come September 21st, this property closes until May and their approach will be to remove the Dispenser chambers and store them in the only building that is heated, the main reception area.  This facility is incredibly situated with every room enjoying an amazing view of the mountains that surround the famous Denali National Park.  Kristin recommended that they take a “Denali Detour” and drive through the park, along a quiet road that you can drive by car, 14 miles into the interior.  Stunning views were a constant and the two saw four Moose and a huge Grizzly Bear along the trip.

Another two-hour drive south took them to their second night’s Hotel, another amazing property located at the base of the 20,320 foot peaks of Mount McKinley, the Mt. McKinley Princess Wilderness Lodge. Talk about the view!  It just doesn’t  get better than this!  Snow-capped peaks above spectacularly colorful slopes.  Amazing!  After a wonderful dinner of Alaska King Crab the Dispenser pair crashed into bed after the day’s long but beautiful drive.

After breakfast of delicious omelettes and Reindeer Sausage, they met with Nicole Gardner, Manager Hotel Service, and her Housekeeping management assistants Crystal and Emily.  Once again, it was apparent that the Dispenser program was a 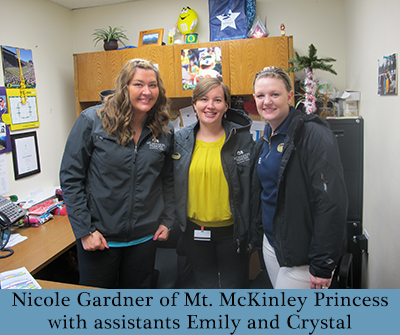 complete success.  “We love it!” was repeated over and over throughout the trip.  “It saves us so much time when we have so many turn-overs that are so fast.  It’s the perfect solution, not to mention the complete elimination of all the small bottle waste.”

The last leg of the drive was two hours further south to Anchorage to meet with Rebecca Wike, Head of Housekeeping at the 198 room Westmark Anchorage, a property that actually stays open through the long, dark, cold winter.  Once again, all was completely positive on the Dispenser scene.

And now, to meet Steve Heinle, with whom the entire conversation started some eight months ago.  The HAP office is just two blocks from the Westmark.  It was so nice for Heather and Steve to put faces to the voices and the emails that had begun this relationship.  Steve’s people in the properties throughout the north had given him the same glowing Dispenser reports that Ian and Heather heard during their short visit to the five hotels.  “This was a very positive change,” says Steve.  “Changes don’t always work the way you hope but this one was a victory for all concerned.  We get rid of the waste but there were many added benefits that made the decision even more positive.”

With well over two thousand rooms in the system, hundreds of thousands of small plastic bottles did not have to go to the waste stream, over the season.  Costs were reduced.  Housekeeping became more efficient and easier to co-ordinate.  The guests loved the WAVE Sensation Spa liquid products and the fact that they didn’t have to fuss with little, hard-to-read, slippery plastic bottles.

But, at the end of the day, the environment was the big winner.  Just as Steve envisioned, his decision made a very positive impact on the spectacular natural surroundings of the Holland America Westmark and the Princess Hotels throughout the area.

After another wonderful drive along the scenic coast, Ian and Heather headed to Anchorage Airport for the red-eye flight through Chicago to Detroit.  They had collected a camera card full of beauty and enjoyed many memorable chats with customers who couldn’t be happier with what Dispenser Amenities brought to their operations.

By Ian Wallace and Michael Faulds