In another win for animal rights activists around the world, TripAdvisor will no longer be selling tickets to attractions that involve contact with wild or endangered animals. Some properties and events have already been removed from the company’s website, while the remaining banned attractions will be fully removed by early 2017. The policy was 6 months in the making and builds upon TripAdvisor’s existing ban on any attractions that involve killing or injuring animals, such as bullfights and captive hunts. END_OF_DOCUMENT_TOKEN_TO_BE_REPLACED 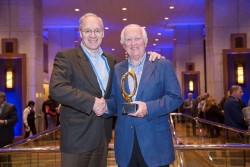 What began with an Invitation to attend the Starwood America’s Leadership Conference on February 16th would lead Dispenser Amenities into a wonderful surprise. Just before leaving for the meetings in Denver that would include 1300 top managers from head office and properties of Starwood Hotels & Resorts Worldwide throughout the Americas, Dispenser Amenities President, Ian Wallace, received an email asking him to attend “a brief but important meeting” with Mr. Tad Wampfler, SVP and Chief Supply Chain Officer of Starwood.

Wondering what could possibly be the reason for this meeting and how many other suppliers would be present, Ian arrived at the Lounge of the Denver Sheraton Downtown for the 1:15 appointment to find that he was the only person present for this meeting. ”I sat down with Mr. Wampfler and three other Supply Chain Vice Presidents and Directors”, Ian says. “I was sure wondering what we had done that would cause us to have to meet with these Supply Chain executives? I had no prior indication that ‘we were in trouble!’” Nothing could be farther from the truth.

After introductions, the discussion started with Tad Wampfler saying, “Starwood works with twenty-seven thousand suppliers in the Americas. And because of the superior service you have provided to our Hotels in 2015/16, Dispenser Amenities is receiving one of eight Supplier Excellence Awards that we are presenting at this meeting.”

John Reardon, Vice President Supply Chain for Starwood, told the story of Dispenser Amenities being a single source supplier to Starwood globally. That is, all hotels must purchase their specified Shower Dispensers from only one supplier, Dispenser Amenities. “The company has designed specially customized Dispensers for our Aloft, Element and Four Points by Sheraton properties and they have delivered them where and when we needed them, with superior quality, throughout the world!” Single source supply is often a problem for Hoteliers as there is no back-up plan if there is a hiccup in the supply. Dispenser Amenities was able to provide delivery to the hotels, throughout the Americas, Europe, Africa and the Middle East (EAME) and Australasia, without fail.

The award, a handsome piece of art fashioned from brass and marble, was presented at the supplier reception held on the second evening of the convention. “It will sit proudly atop one of our office pedestals for all visitors to enjoy,” says Ian Wallace. “This could not be more of a team award. It was not one or two individual delivery successes but twenty years of adding one brush-stroke every day to what has become a customer-service masterpiece. We are so proud and all of our people in every Sales Office and every Warehouse have played a role in this award”

Bringing awareness to environmental issues has been a priority for Dispenser Amenities for many years. In recent years, celebrities have notably been using their fame as a platform to advocate for environmentalism. The 2016 Oscars recognized some of the best actors of our generation, including the often nominated but frequently overlooked Leonardo DiCaprio. In his Oscar acceptance speech for the Best Performance by an Actor in a Leading Role, DiCaprio spoke about the importance of protecting our planet stating that “We need to support leaders around the world who do not speak for the big polluters, but who speak for all of humanity…” Two up and coming examples of environmental leaders that deserve recognition are the founders of Seabin and The Ocean Cleanup.

One of the most important elements of the Earth’s ecosystem is the ocean; with water covering roughly two-thirds of the Earth’s surface, keeping these regions clean is instrumental to our continued survival. This undertaking has two essential components: keeping the trash from reaching the ocean, and cleaning up what is already out there. Two new companies from different corners of the world are presently working to accomplish each of these tasks.

Seabin was founded by a pair of Australian surfers – Peter Ceglinski and Andrew Turton – who had become increasingly frustrated with garbage, oil, fuel, and other waste clogging up the waterways. They recognized that much of this garbage came from the marinas, and the most efficient cleanup system at the time was simply a person on a boat with a net. The pair figured there must be a better way.
Enter the “Seabin.” The system works by pumping water through a natural fiber bag that captures all sorts of debris including plastics, oils, and paper. It works along the same principles as a standard pool filter. This system is highly effective at attracting garbage and helping to keep it from contaminating the open ocean, but it is a supplemental solution. It is together with conventional methods of removing trash that the Seabin will help minimise the amount trash that pollutes our oceans.

This startup, founded in The Netherlands by Dutch entrepreneur Boyan Slat, takes its ambitions farther out into the open ocean. Once in the oceans, plastic pollution collects in one of the world’s five gyres. Current methods for cleaning the ocean are inefficient and time-consuming, which inspired Slat to create The Ocean Cleanup. Boyan Slat’s solution is to harness the oceans’ natural currents and create a massive barrier that captures all of the plastic and refuse passing through. This garbage can then be gathered and disposed of. Boyan Slat has already received millions of dollars in support and won praise from the UN. Although still in the testing phase, studies have shown it to be full of promise.

SeaBin and The Ocean Cleanup are two companies that are facilitating a cleaner future for our planet through creativity and entrepreneurship. These are the types of companies that deserve our support and recognition. We need to look to leaders such as these to continue to create momentum towards global environmentalism and supporting environmental initiatives.

For over twenty years, Dispenser Amenities has worked very hard to make a real difference in environmental issues, from our core mission of introducing amenity Dispensers aimed at reducing plastic hotel waste to supporting green initiatives such as The Plastic Pollution Coalition.  Naturally, we are always on the lookout for projects that strive to implement effective and environmentally sound strategies.  The Three-North Shelterbelt Project in China does exactly that.

What is the Three-North Shelterbelt Project?

The problem China faced was increased desertification along China’s northern border with Mongolia due to a combination of dust storms blowing in from the Gobi Desert, and tree removal as a result of mining operations and clearing farmland. The shelterbelt project, also known as “The Great Green Wall,” was started in 1978 to combat this growing issue.

The project consists of a concerted effort to plant a wall of trees along China’s border with the Gobi Desert. Just as the Great Wall historically helped to keep Mongolia’s human invaders at bay, the Great Green Wall promises to keep desertification at bay. Through a combination of cash incentives, aerial seeding, and more, China has managed to plant billions of new trees along its northern border.

China’s shelterbelt project is not the first of its kind, however it is the largest. Another similar initiative was pioneered in the U.S. from 1934 to 1942. Millions of trees were planted to create the Great Plains Shelterbelt, a project that survives to this day and provides relief from dust storms to farmers and families stretching from Canada to Texas. China’s project represents a massive scaling up of this proven concept.

What Are the Benefits?

By undertaking this project, China is moving to secure a greener future for its citizens. These trees provide a wind break and help to shield the southern territories from sandstorms that blow in from the north. Already, territories within the Great Green Wall region have noticed a reduction and even reversal of the effects of desertification. Leading scientists within China have noted an increase of vegetation within the region and a reduction in dust storms frequency and intensity.

This project is proving to be a highly effective solution to a massive environmental problem. In fact, it represents one of the largest responses by a national government to an environmental threat: something that we at Dispenser Amenities believe more national governments should take note of. It is only through significant collective efforts such as these that we can reduce and even eliminate the environmental damage inflicted on our planet over centuries of neglect.

Taking inspiration from America’s and China’s projects, nations in Africa have taken note of the success and have launched projects called the Great Green Wall of the Sahara and the Sahel Initiative (collectively known as GGWSSI). With efforts such as these, the future is certainly looking a whole lot greener – pun intended.

LucidEnergy, posed an interesting question: What is the most common source of running water with which people interact? The answer lies underground in the pipes that deliver water cities’ residents. LucidEnergy then asked: why not install hydroelectric generators in the water pipes themselves? Unlike the streams and rivers traditionally used in energy production, pipes are reliable man-made artificial constructs. As such, there is minimal environmental impact associated with the use of these generators within existing city pipes.

To make this happen, LucidEnergy created the “LucidPipe”. The LucidPipe functions much like a standard water pipe but comes equipped with turbines hooked to generators. These turbines are capable of generating power from everyday drinking water flowing through them. By using LucidPipes, the environmental impact decreases significantly and energy production is more resistant to external factors such as drought due to the necessity of drinking water even during lean times.

Where is this Happening?

The system is still in its early stages of adoption, however it has already passed its initial test in Riverside, California and has been fully installed in Portland, Oregon. LucidPipe has proven effective in Portland and has already drawn attention from cities in China, Mexico, Brazil, and Canada. Cities adopting LucidPipe can gain revenue from the power generated from drinking power in addition to their pre-existing drinking water costs.

The biggest benefit with the LucidPipe system is how it reduces environmental impact. LucidPipe is an ingenious solution to the environmental consequences resulting from large-scale dam building. Man-made pipes are the perfect eco-friendly power generation tool. The LucidPipe eliminates issues associated with dams such as inconsistency, flooding, and greenhouse gas emissions. As more cities move to replace old pipes with power generating models, cities shift away from destructive dam building and move towards a lower-impact solution.